Things are getting complicated these days here are some photos of the thick of it.... 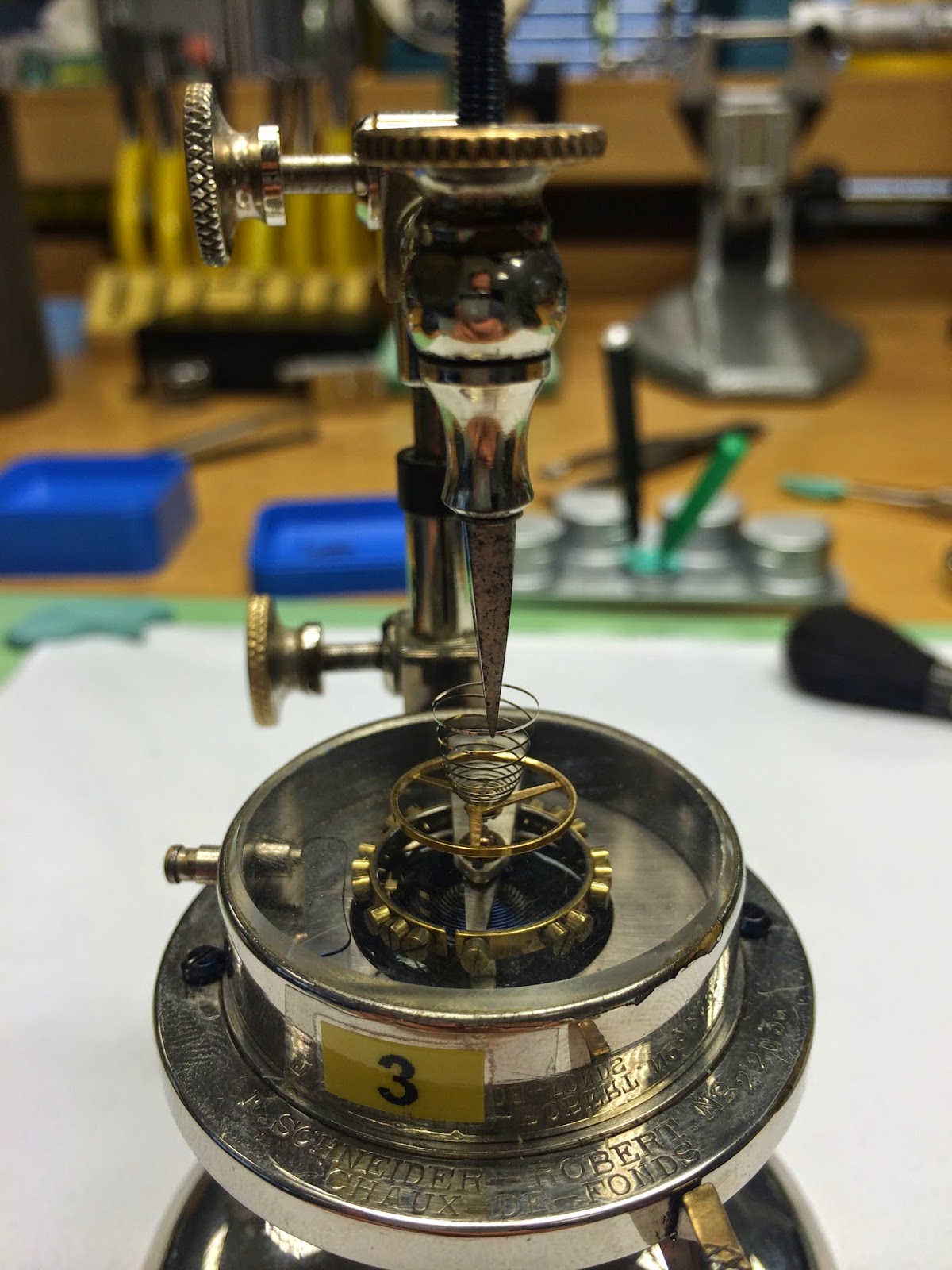 Here is the hairspring at the correct length now being studded up to the balance. From this point forward lots of little adjustements need to be made to keep the spring concentric and flat while in the watch. It's the last time you get to work with the spring before it become much more awkard as its placed in between the balance wheel and bridge. 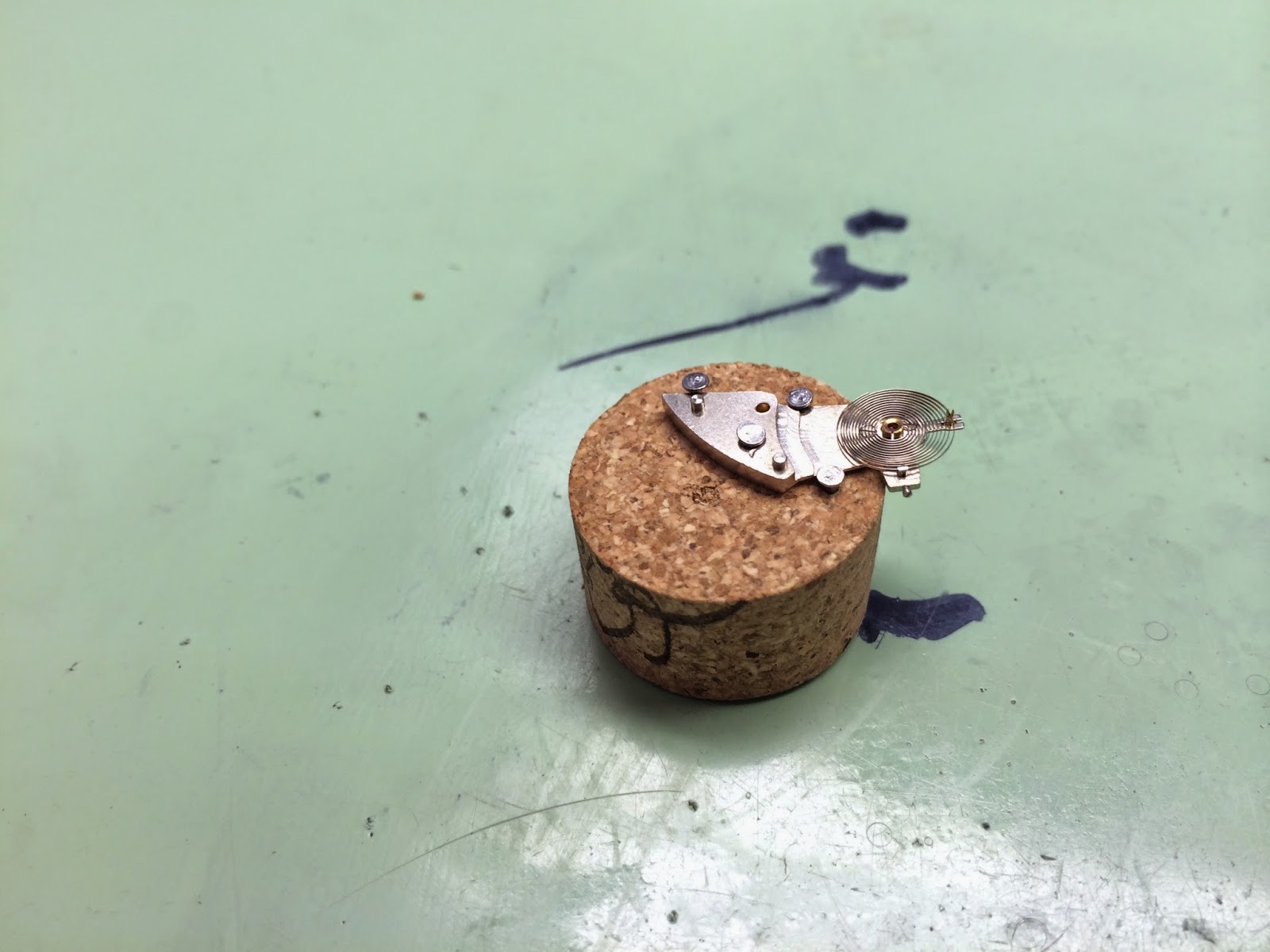 Lastly here is the watch on the timing machine. The three values on the screen represent (from left to right) the daily gain in time, the degrees (in miliseconds) to which the watch is in beat (the balance being correctly aligned to work with the escapement) and lastly the amplitude of the balance, which in itself is a large subject as you need lots of amplitude for the watch to be accurate and sometimes modifications need to be made to increase it.. 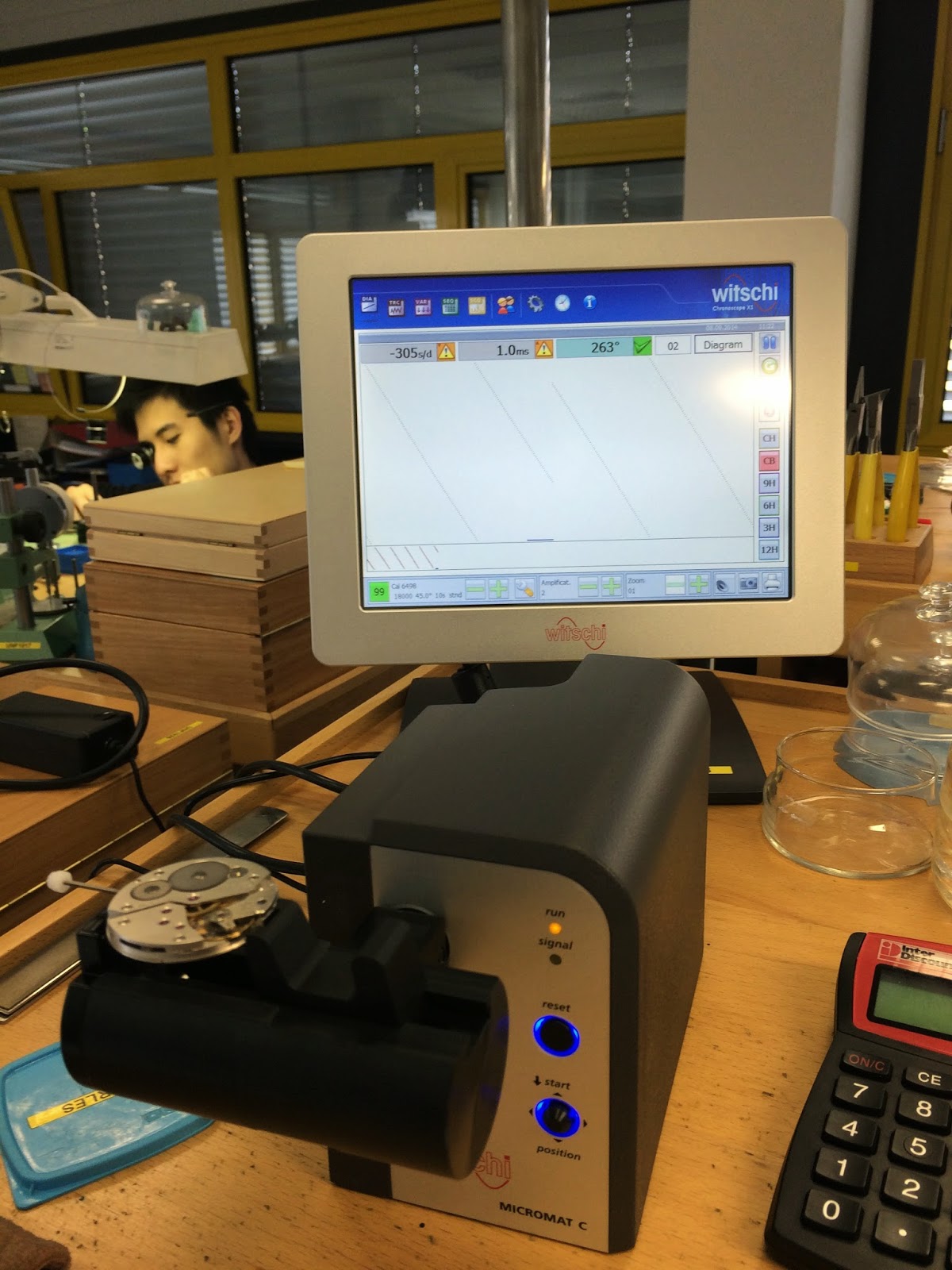 Posted by Unknown at 9:09 AM No comments:

Aside from making a bushing and stopwork finger  for the GP movement I had to create the whole Geneva stopwork for the other movement! Heres a few photos of the raw parts before they were filed to fit and heat treated. 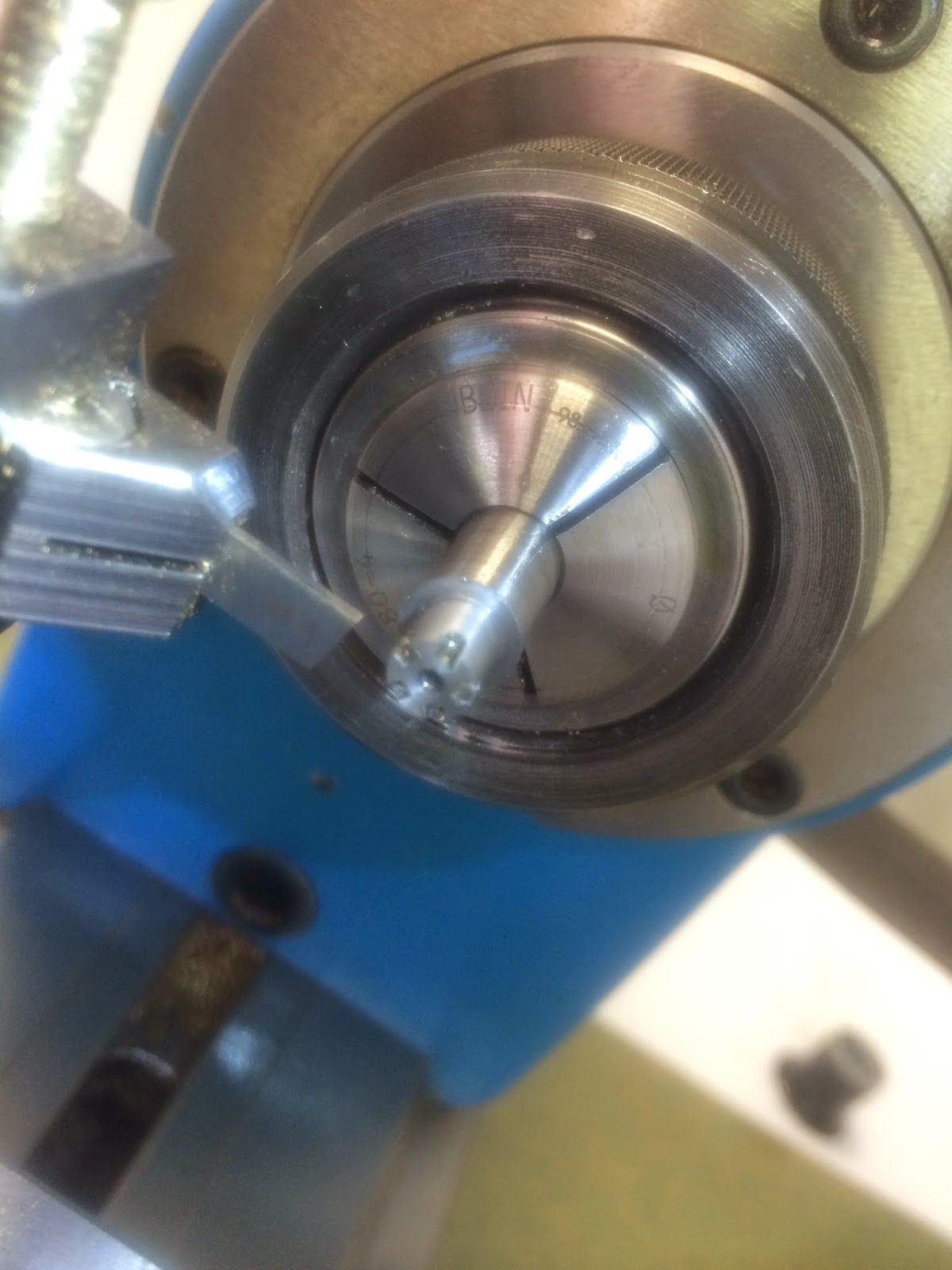 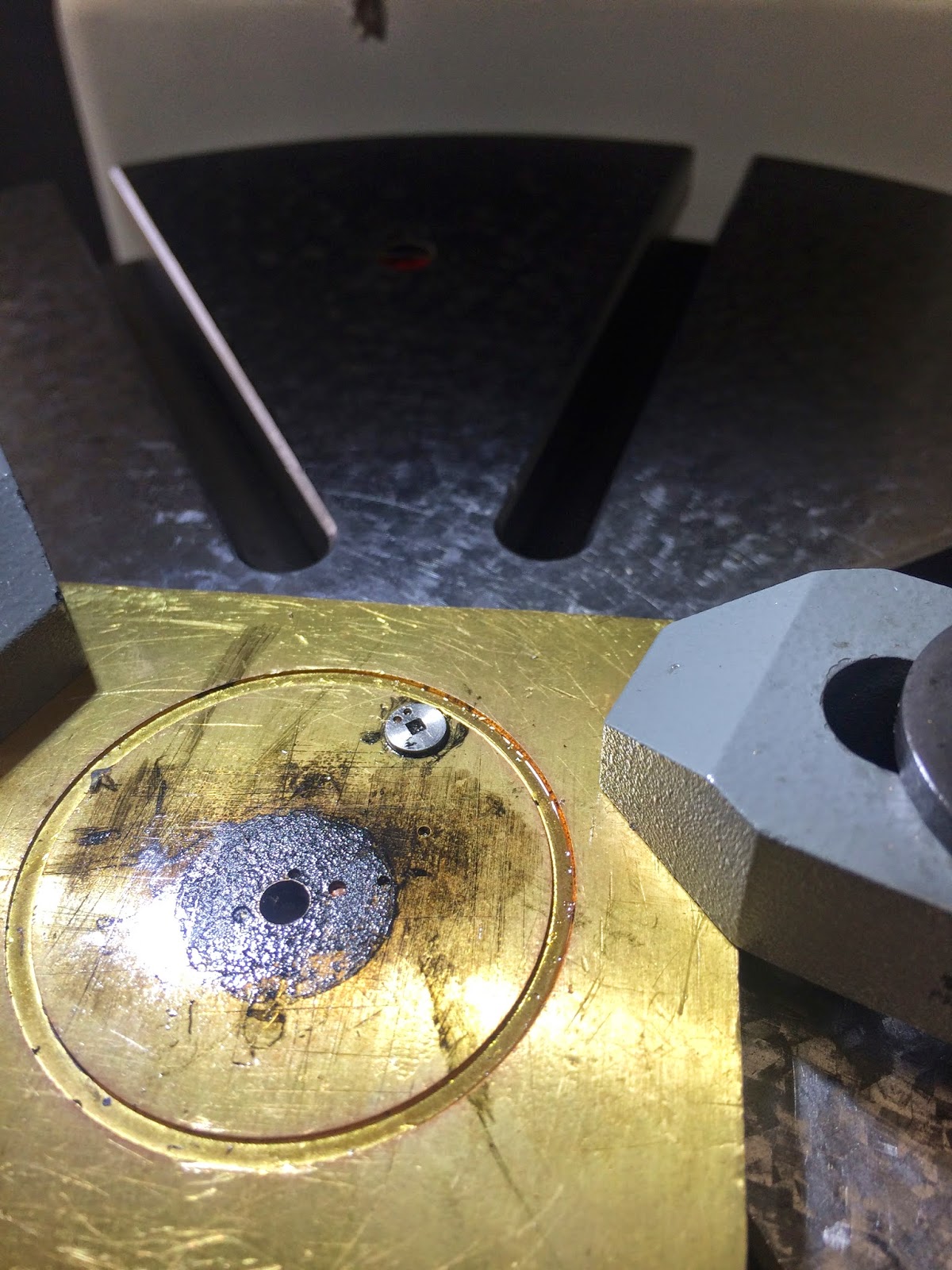 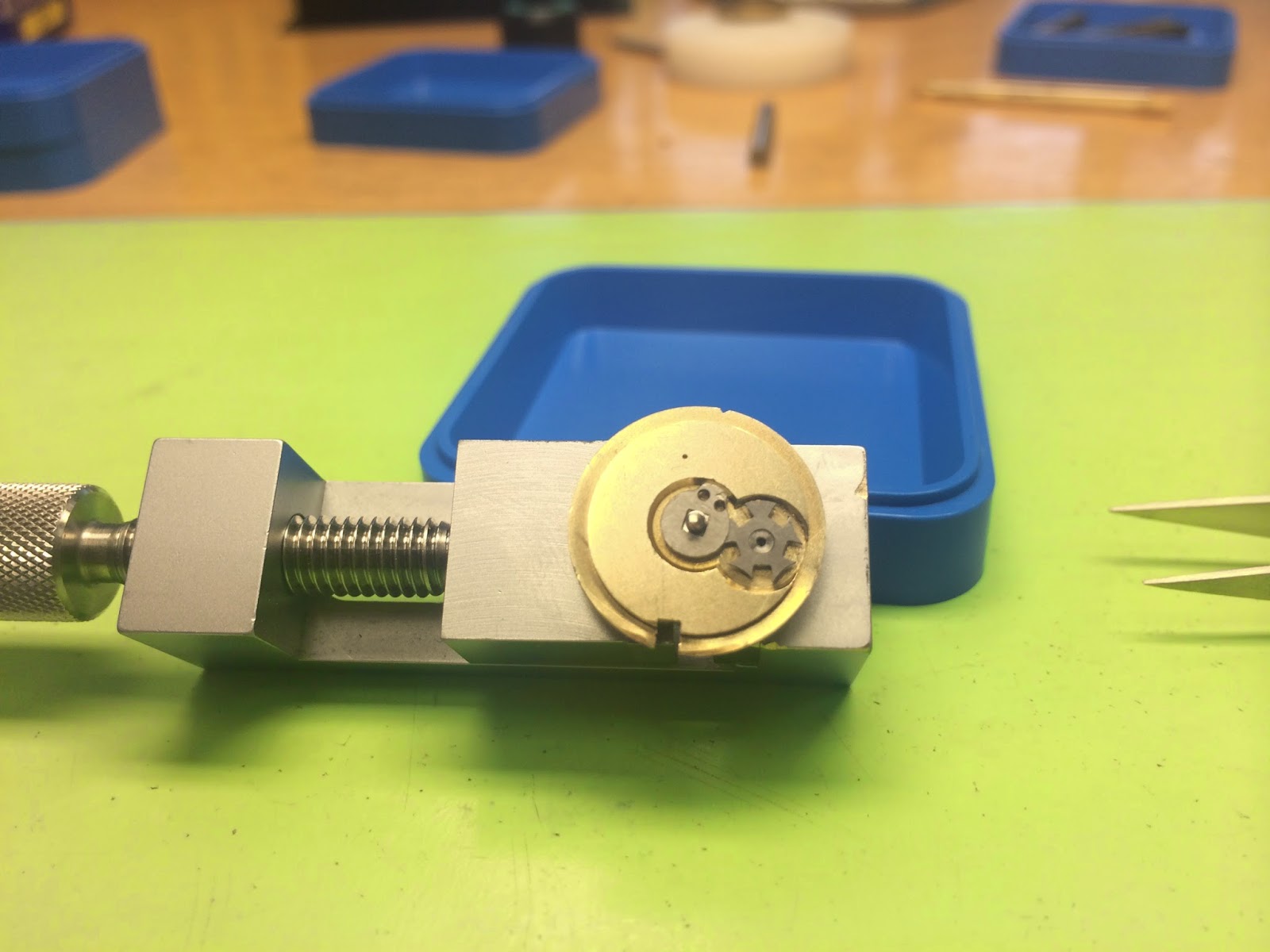 put simply this system restricts the barrel from letting out the mainspring on its first and final rotations. What that means the power going to the watch is consistant and uniform because the barrel is only using the middle rotations which are under the same strain.While improving the precision of the watch this feature also prevents the user from overwinding the watch.

Posted by Unknown at 2:42 PM No comments:

bushing it to the limit

It seems I have to replace the bushing for the maltese cross so I have to drill out the old one and rivet in a new hand made one. Notice the pearlage on the barrel cover which is repeated throughout all the flat surfaces of the barrels exterior on this movement, this movement is really high grade!

Here is the barrel cover of the GP movement all glued up with the new bushing just to the left. 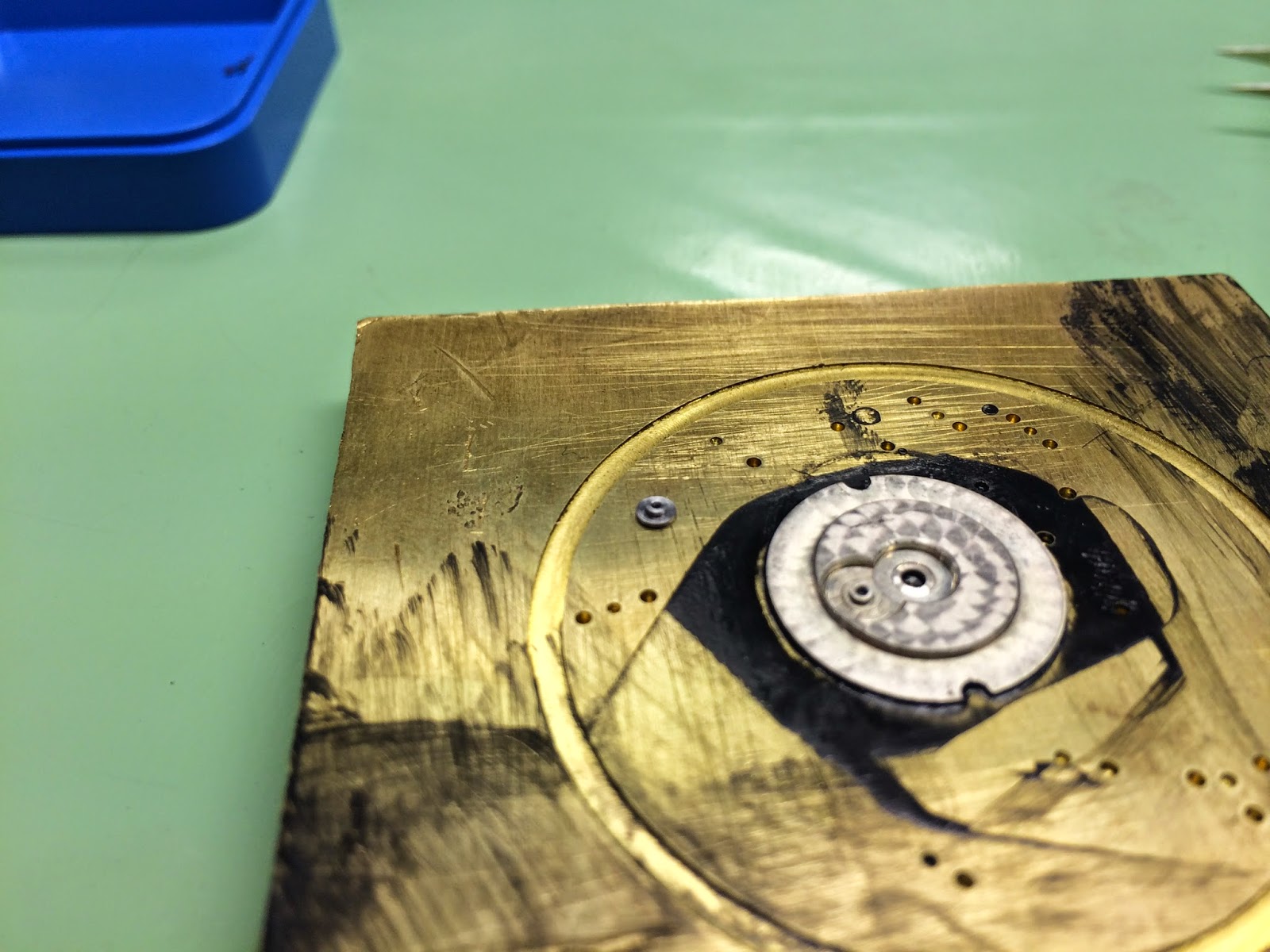 Posted by Unknown at 1:18 PM No comments:

just a few photos from around the shop 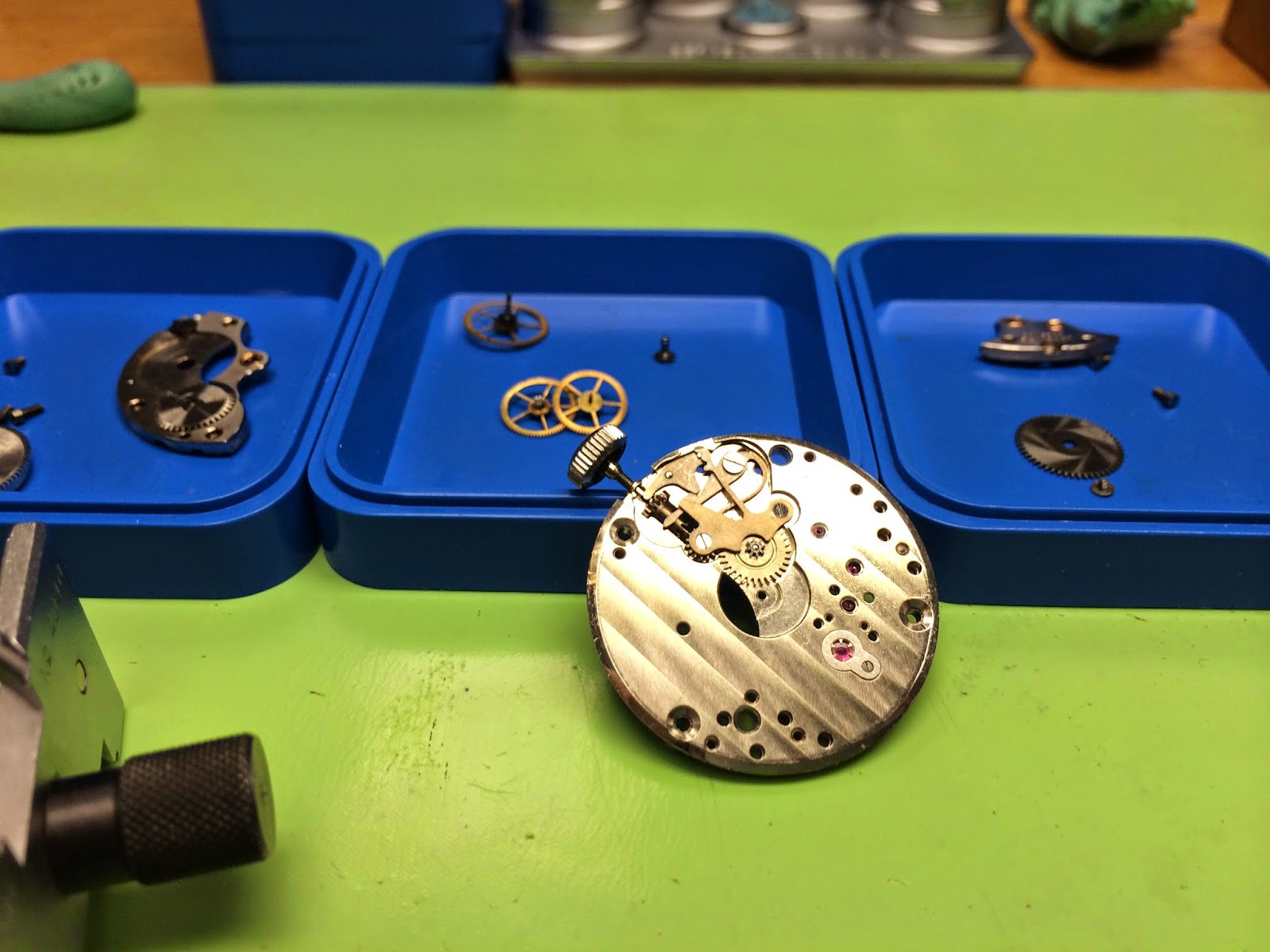 Heres a dial side view of the movement from my grandfather's longines watch. Excellent finishing real old school Longines quality! 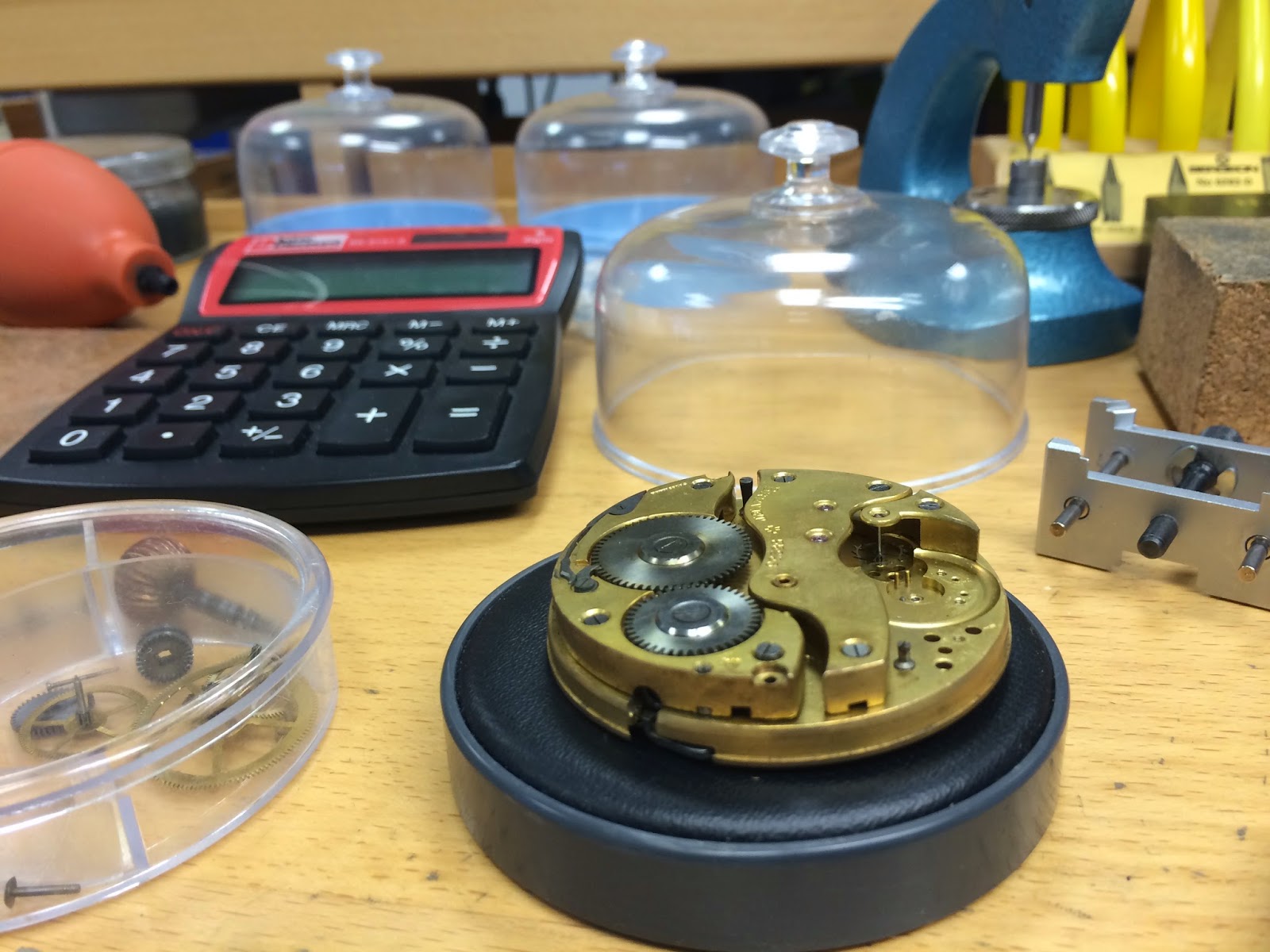 This behemoth belongs to a travel clock I was given. 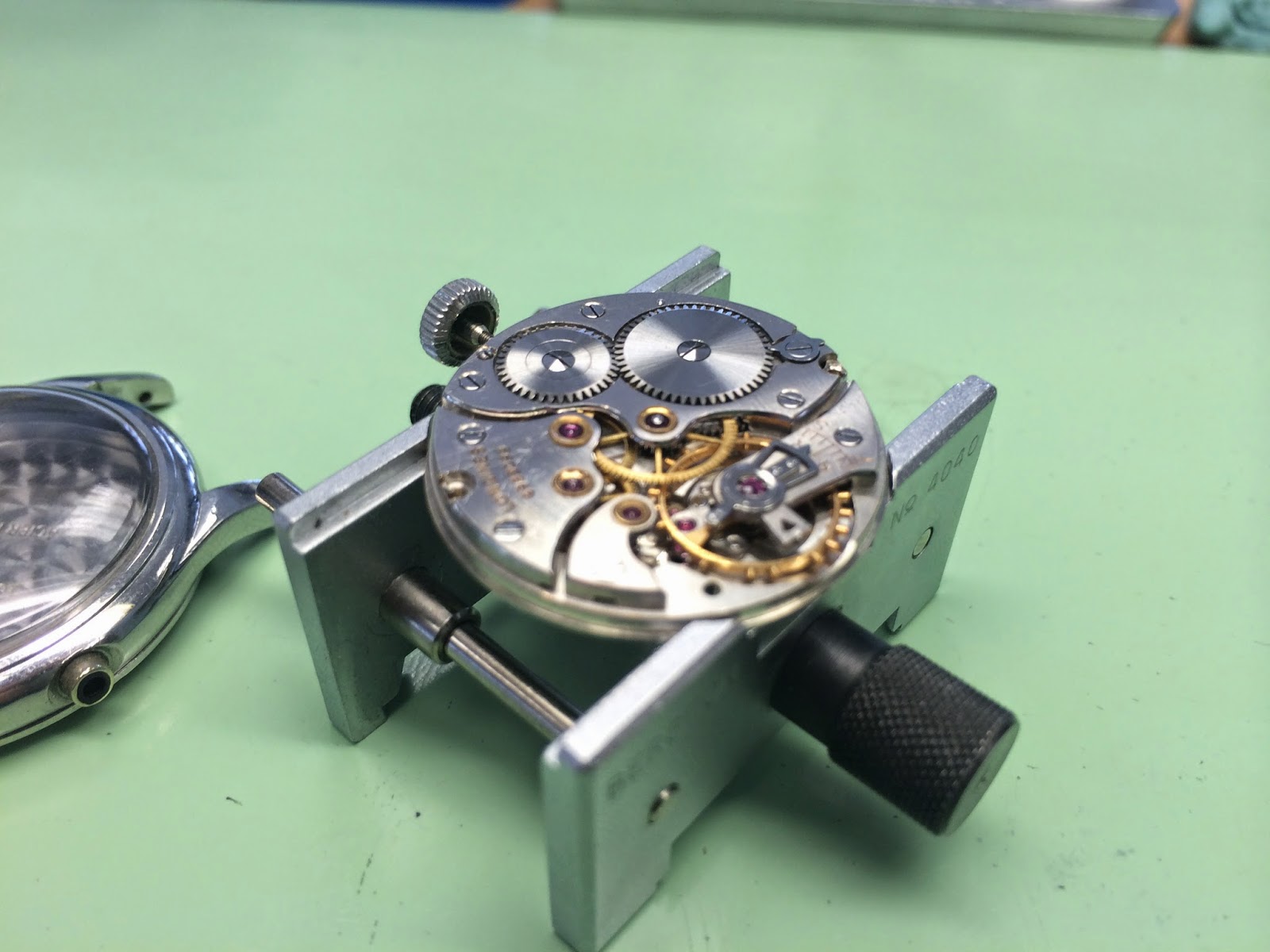 Another photo of the longines. Cant quite make out the strait grain on the bridges and the hand beveling will take a better picture soon. 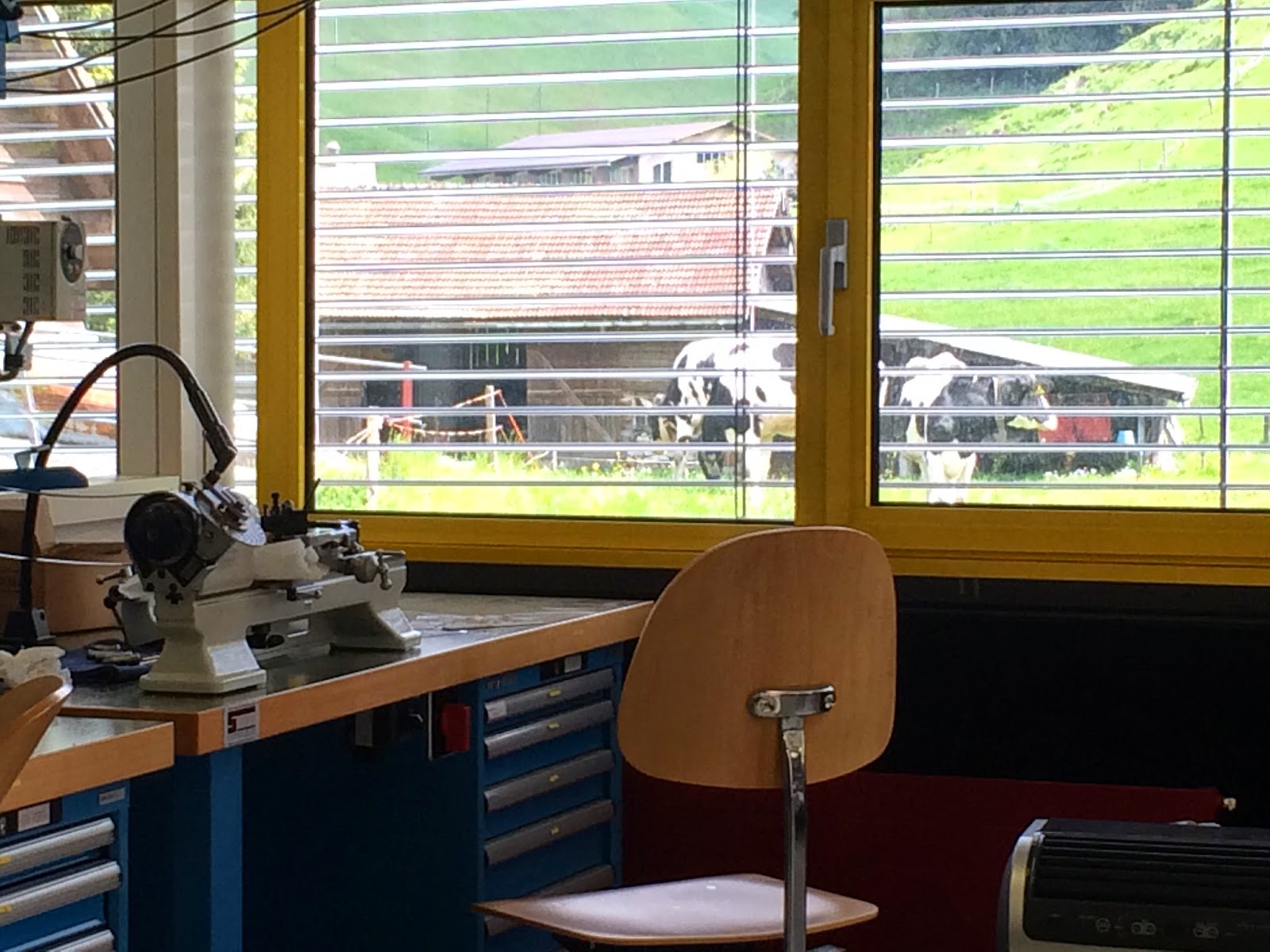 getting to know the neighbours 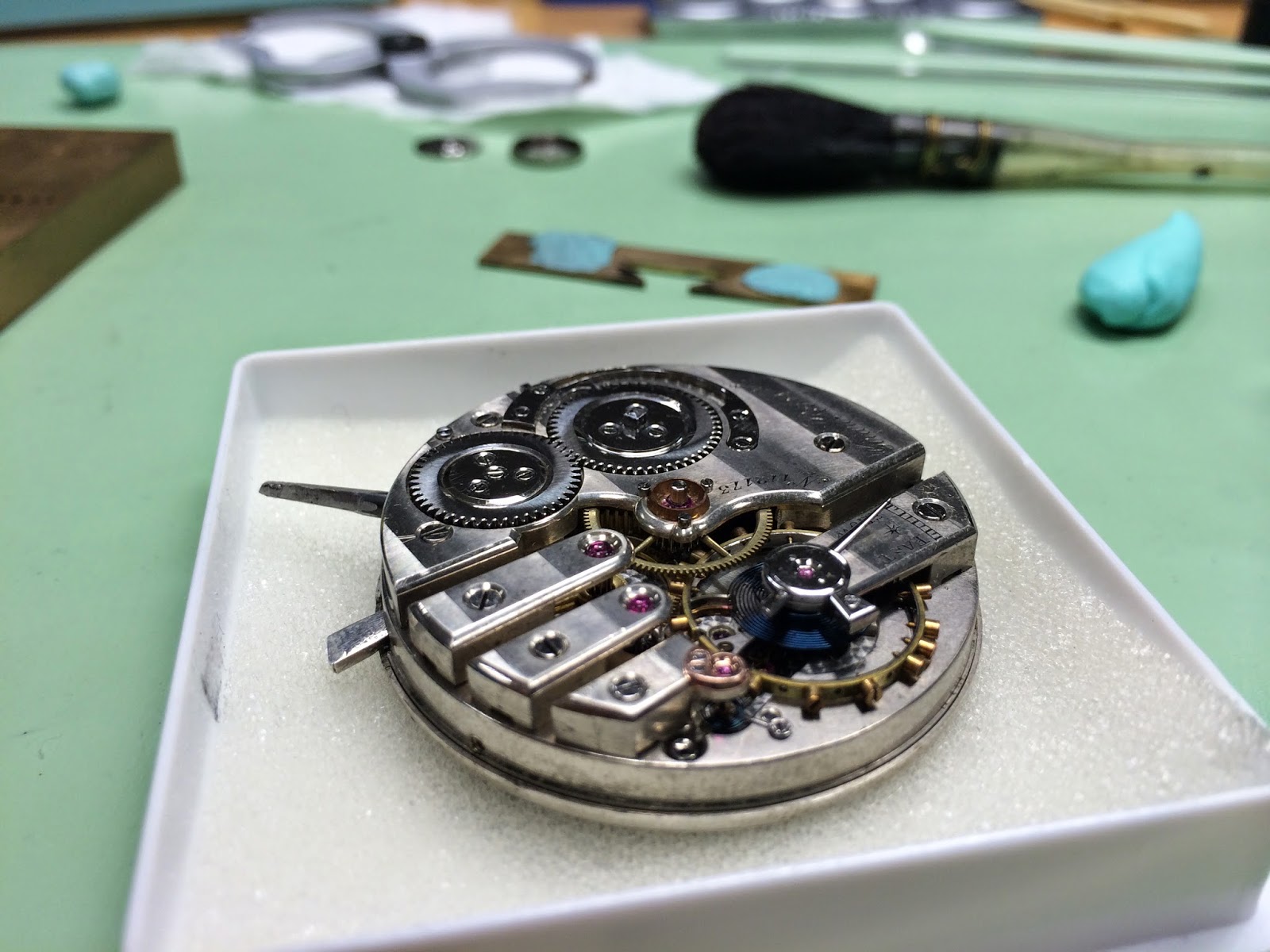 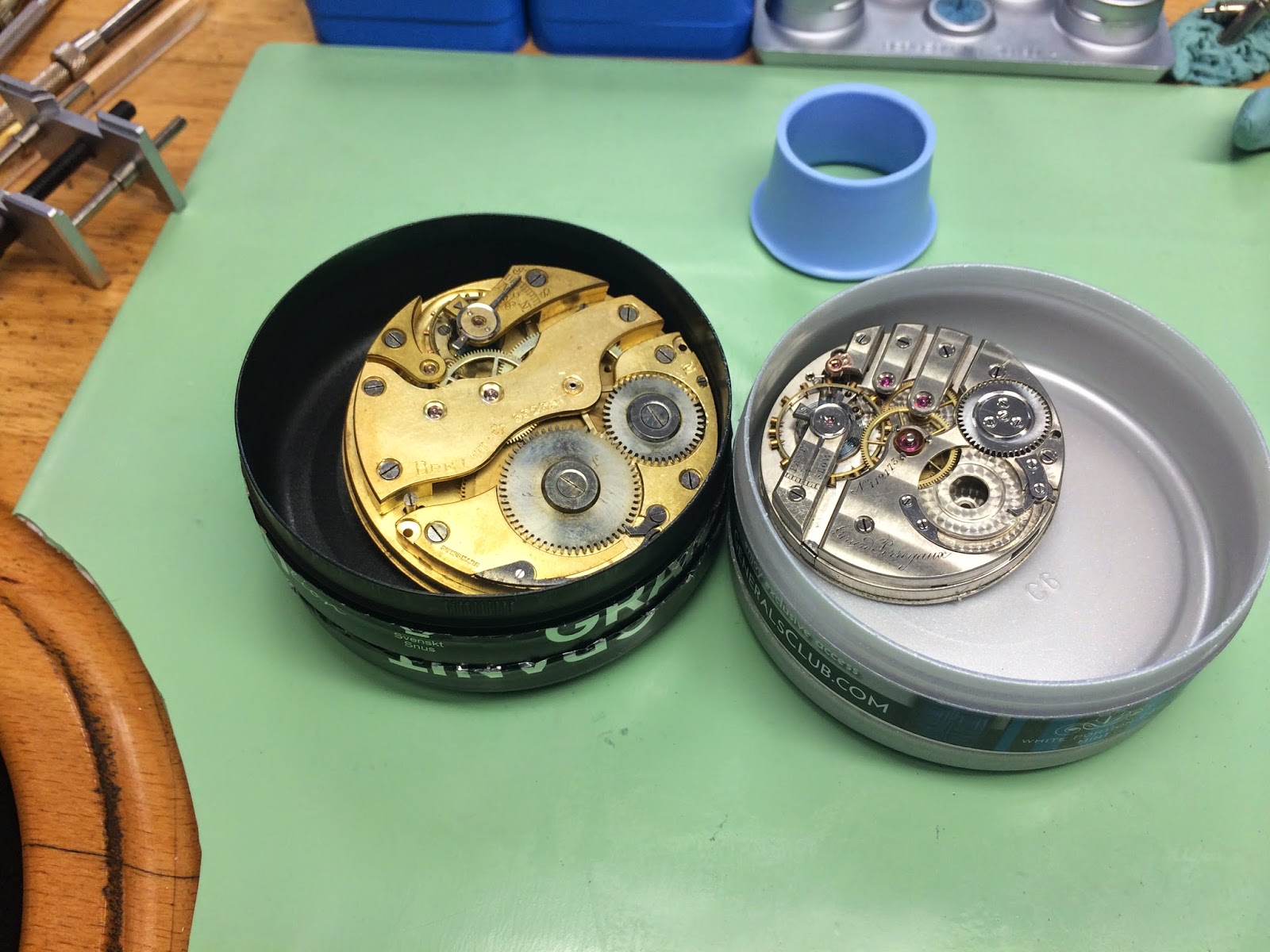 who doesnt store movements in snuss boxes?
Posted by Unknown at 12:18 PM No comments:

With a little determination my good friend Brad Taylor (http://taylorhorology.com/) and I got ourselves an impromptu meeting with the head of product development at Jacquet Droz. Not only did we get a rare chance to interact with a brand that we both admire, we also got to see two iterations of Brads personal favourite watch; The bird repeater.

Whats important to note is that this watch is not just a minute repeater that uses the mechanism of the minute repeater complication itself to move the birds, rather it has its own automata complication separate from the minute repeater. The automata complication is an intricate system of cams that produces several actions; one of the birds feeds her young while the other shows off its plumage during such time an egg hatches at their feet revealing a baby chick. All the while a waterfall flows in the background. 8 motions in all make this by far one of the most impressive and complicated watches on the market.

Brad and I got to see both a solid gold version of the watch (which took hundreds of hours to engrave!) and  a stripped out version that lets you see more of the mechanism behind the show. 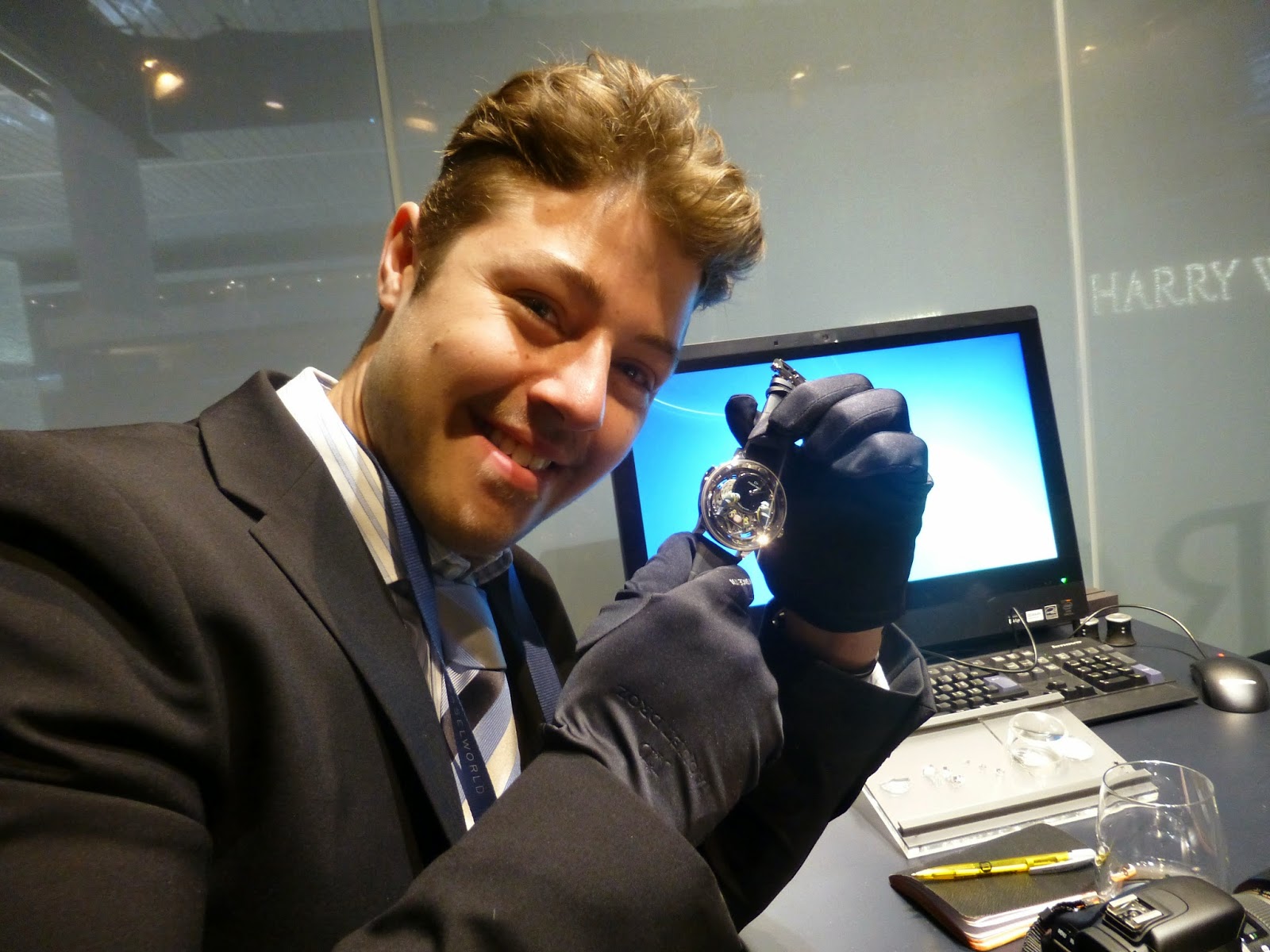 Brad with the dial-less repeater 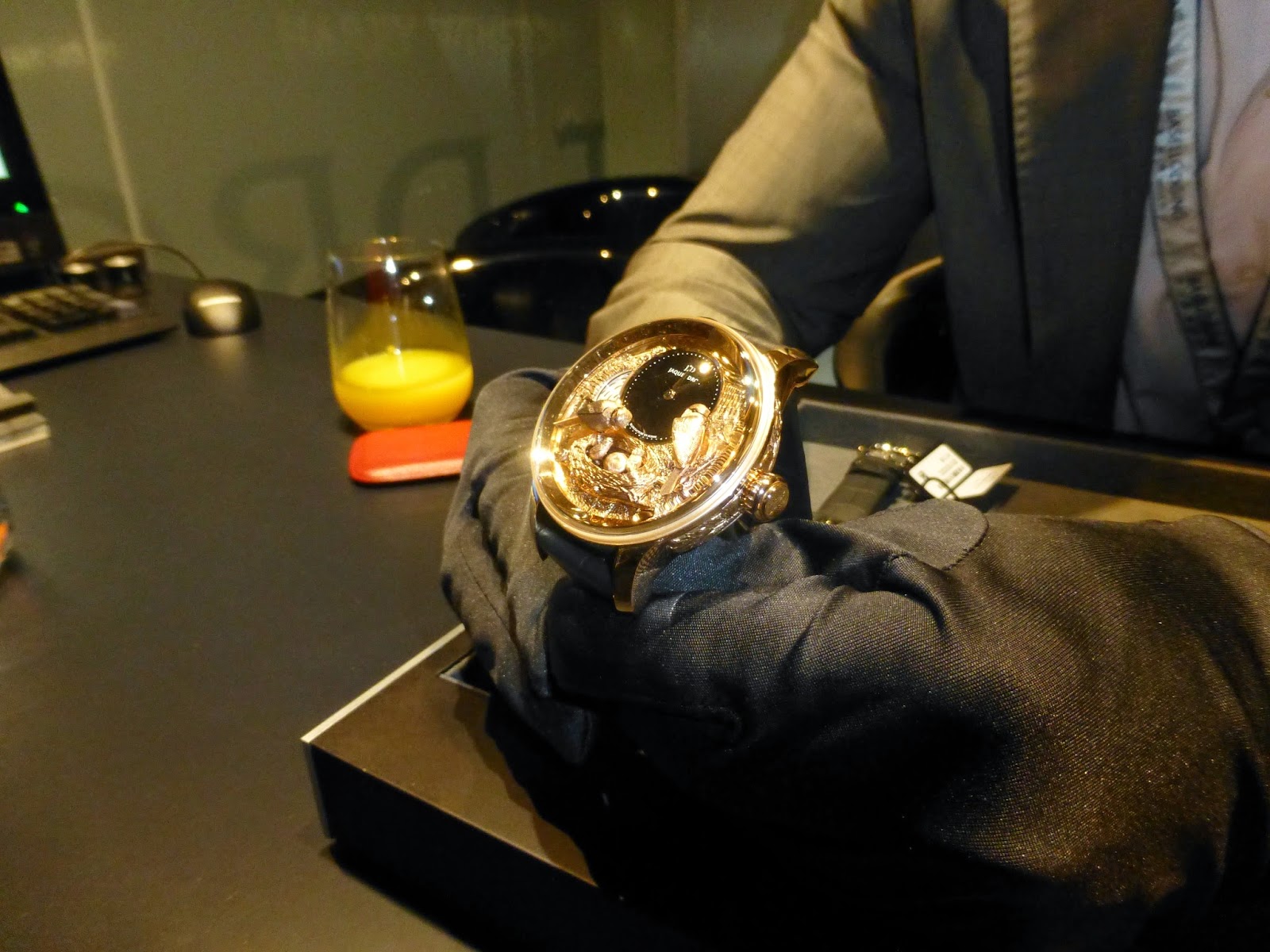 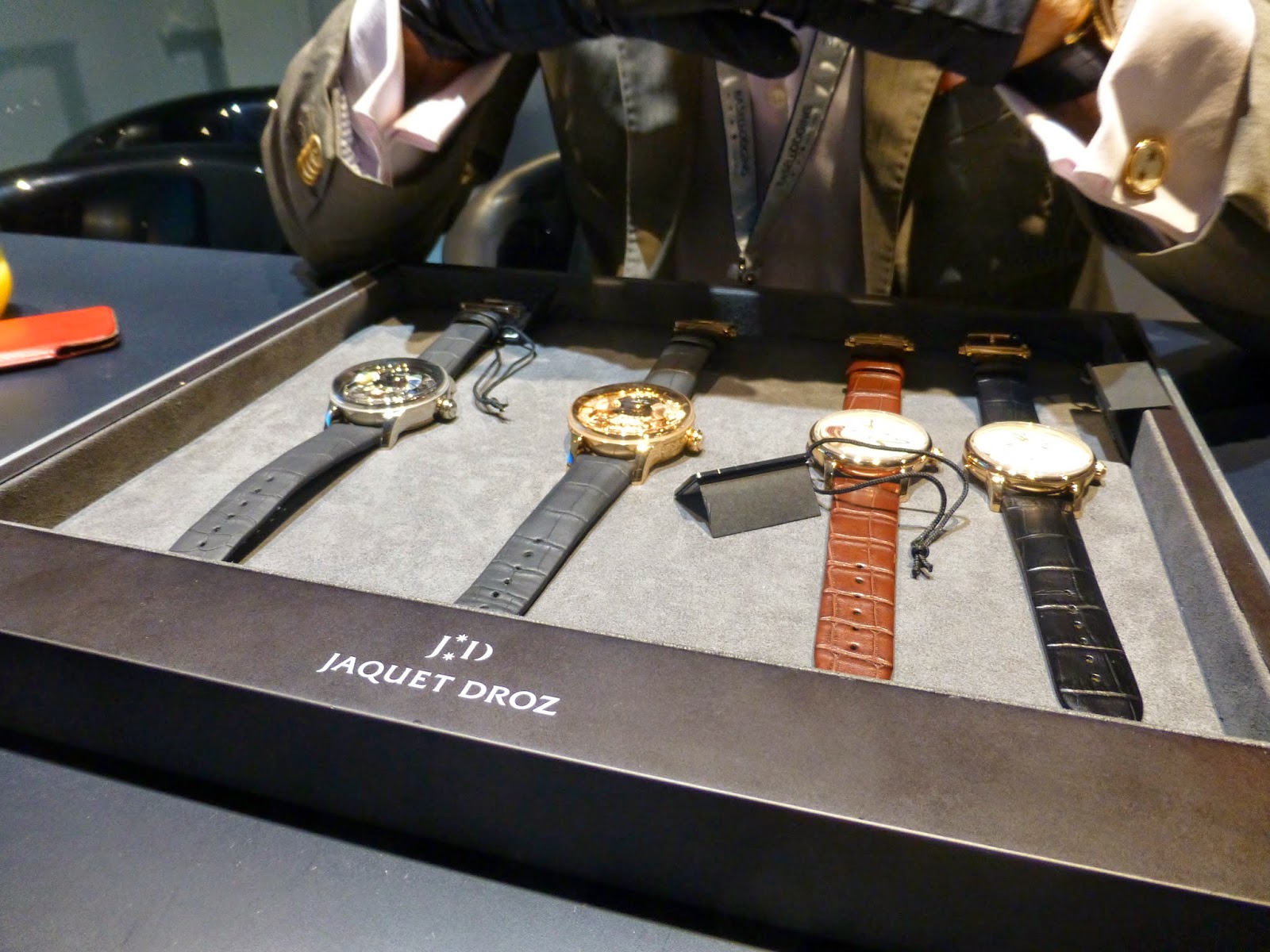 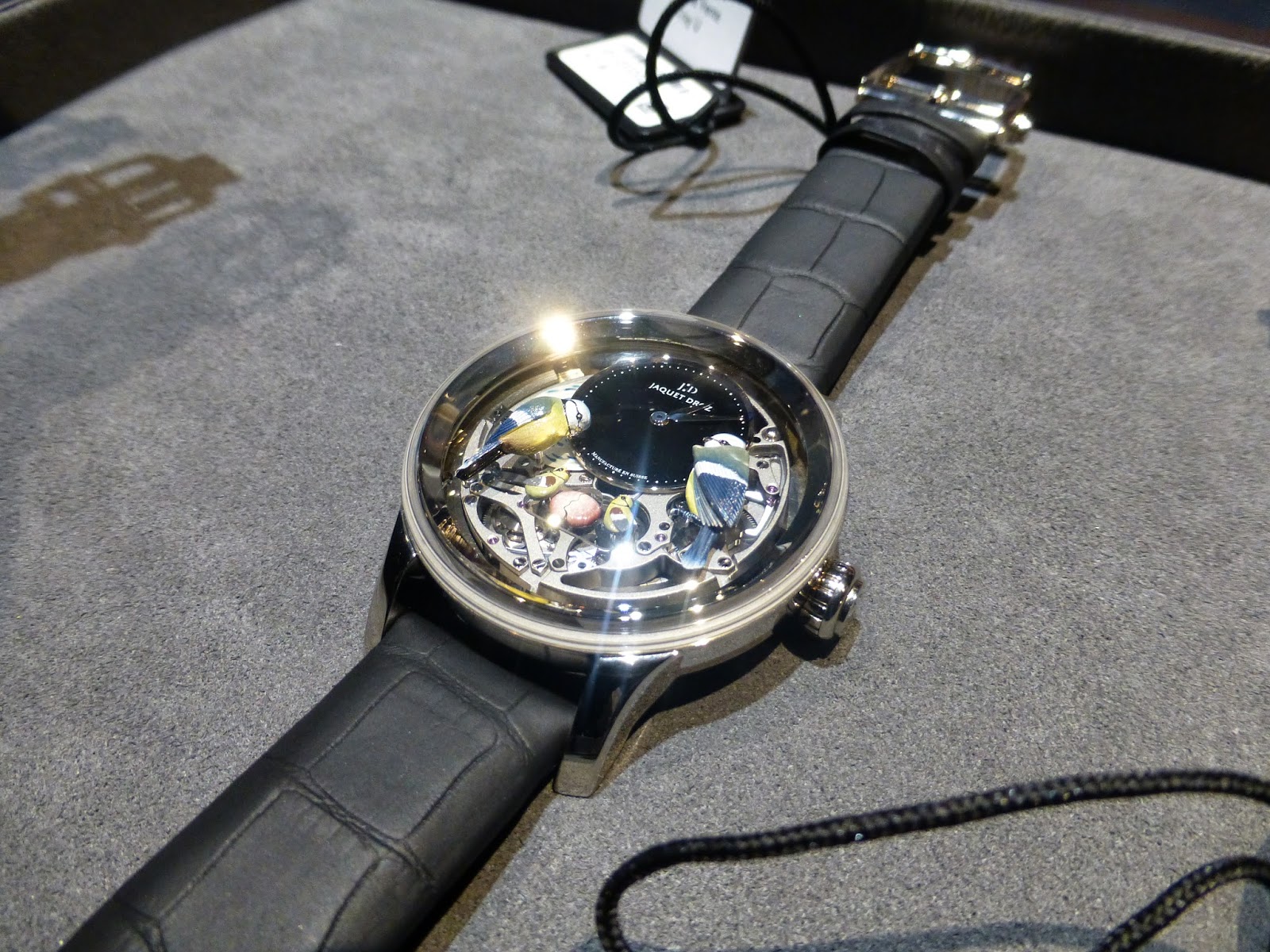 oh and by the way each watch cost almost 500 thousand Swiss franks each!
As my photos hardly do any justice to these beautiful pieces here is a link to the site; http://www.jaquet-droz.com/the-bird-repeater/en/


more to come from the workshop soon!

Basel World 2014 was a great success with lots of interesting pieces on display some of which I had the pleasure of being able to photograph so lets get right to business.

The one and only Poker watch from Christophe Claret (costing around 200,000CHF) ; One can play a game of Texas hold'em with up to three players. With this fully mechanical complication which appropriates a full deck of cards, the game is completely random and you have just the same odds as if you were playing with a real deck! 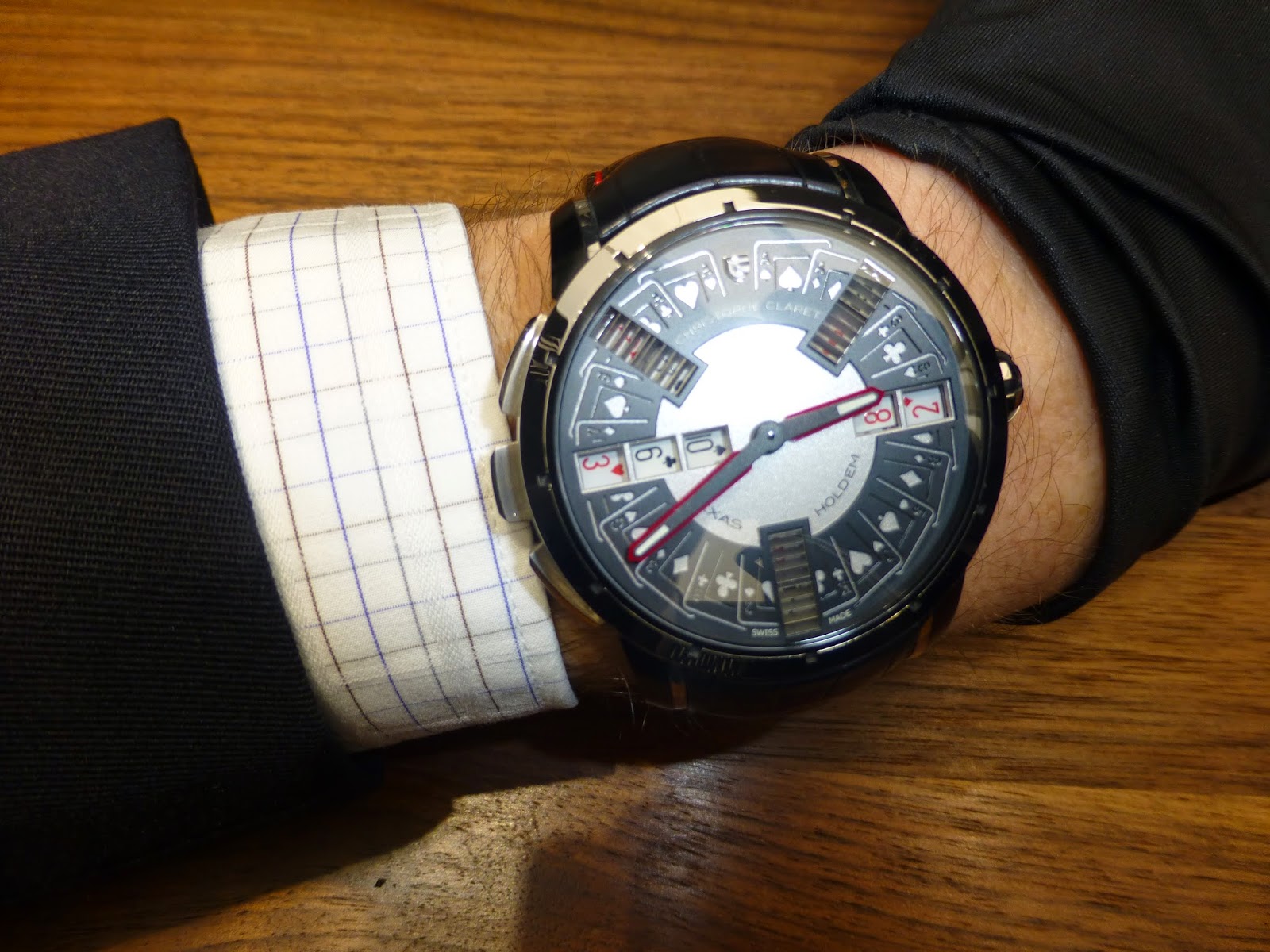 There were two other watches from Claret making their debut; A distinctly feminine complication which randomly plucks petals from a sunflower in the fabled game of would be princesses "he loves me, he loves me not". This watch was even more complicated than its more masculine siblings with around 700 parts in total! Being a ladies watch it comes with a full compliment of high grade diamonds making the piece cost a whopping 280 thousand Swiss Francs. 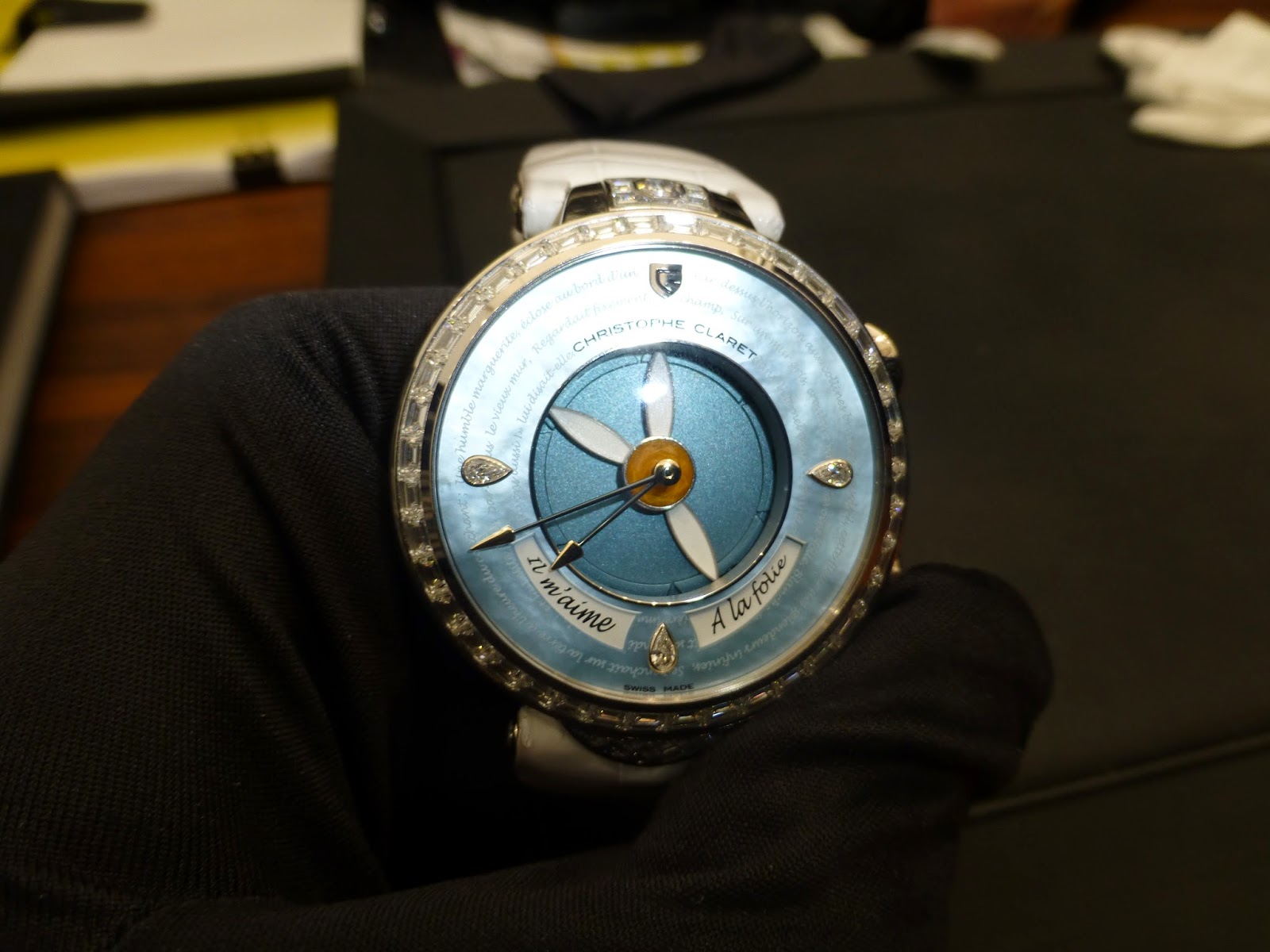 When the button the right (at around 2 0'clock) is pressed either one or two petals will slip away. There is no repetition to the way the petals fall off so each time you play you never know what the answer will be!

The last watch was a bit of a surprise for me and I have to admit I was quite impressed with the result. Claret decided to tackle one of my favourite escapements, the detent, and appropriate it to the wristwatch with a constant force mechanism to boot! The company went to great lengths to confront the issue of shock absorption surrounding the escapemen. A bridge with a dampening mechanism was developed to absorb shocks that would go to the arm of the escapement. As the detent arm is such a delicate mechanism a simple shock could release the whole gear train from its control causing serious damage to the watch. I found the level of finishing to be very impressive as well and was surprised to see they even used a sapphire bridge (without even making a big deal about it!) so we can see even more of the components. 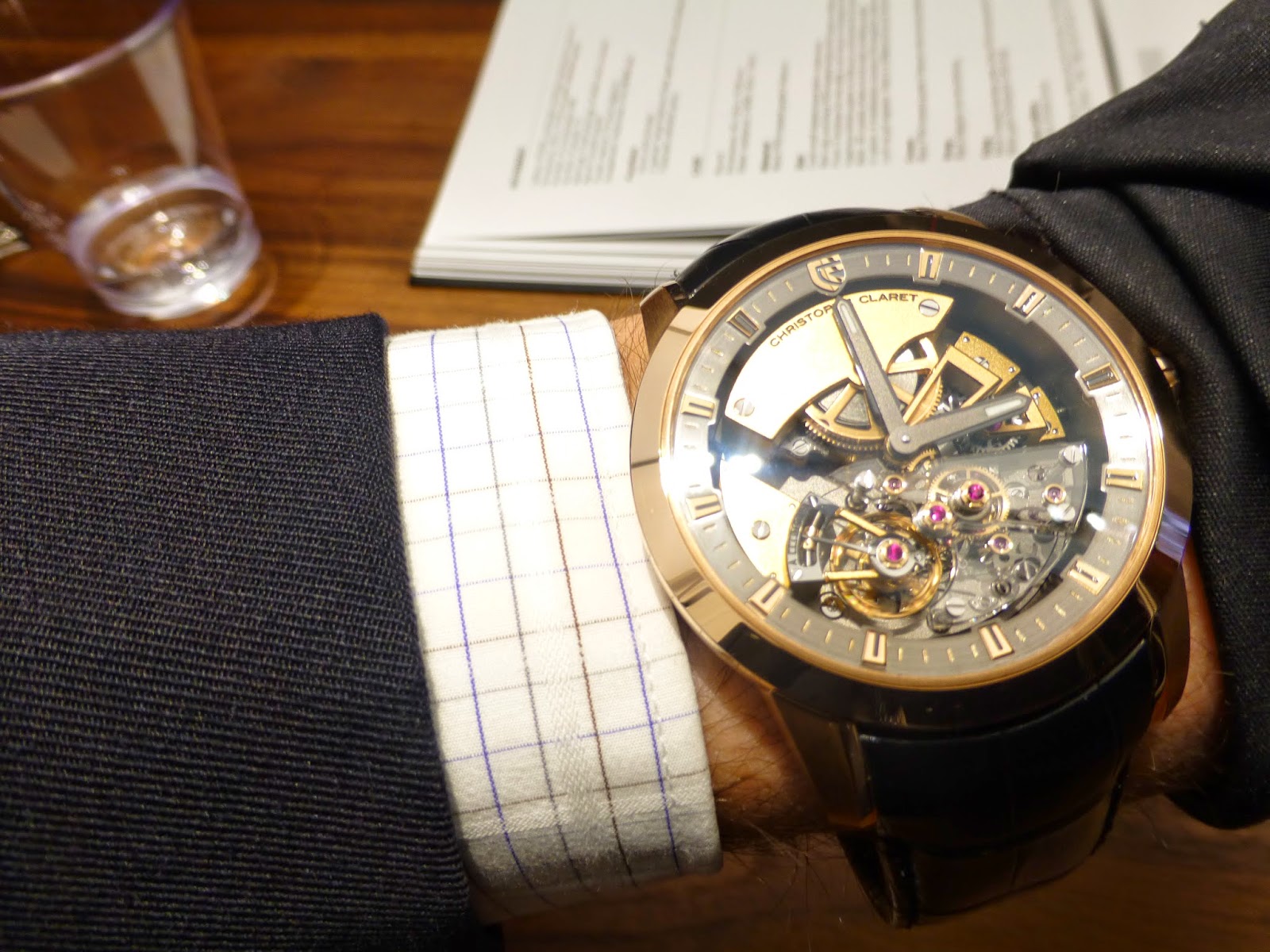 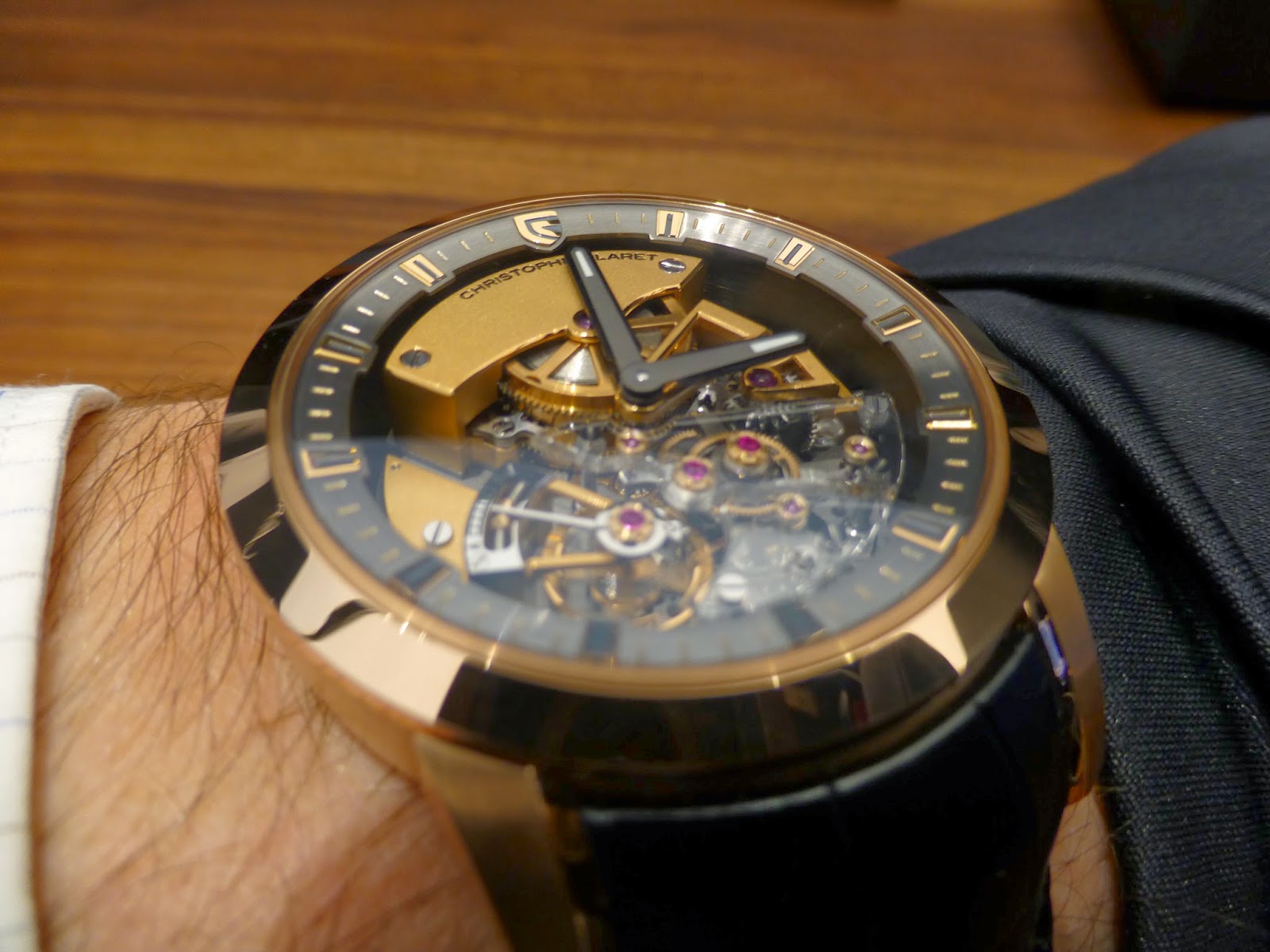 More to come from Basel soon!
Posted by Unknown at 12:47 PM No comments:

A fun restoration project which will help me to understand the detent escapements construction and how it SHOULD be done! Isn't she a beaut! 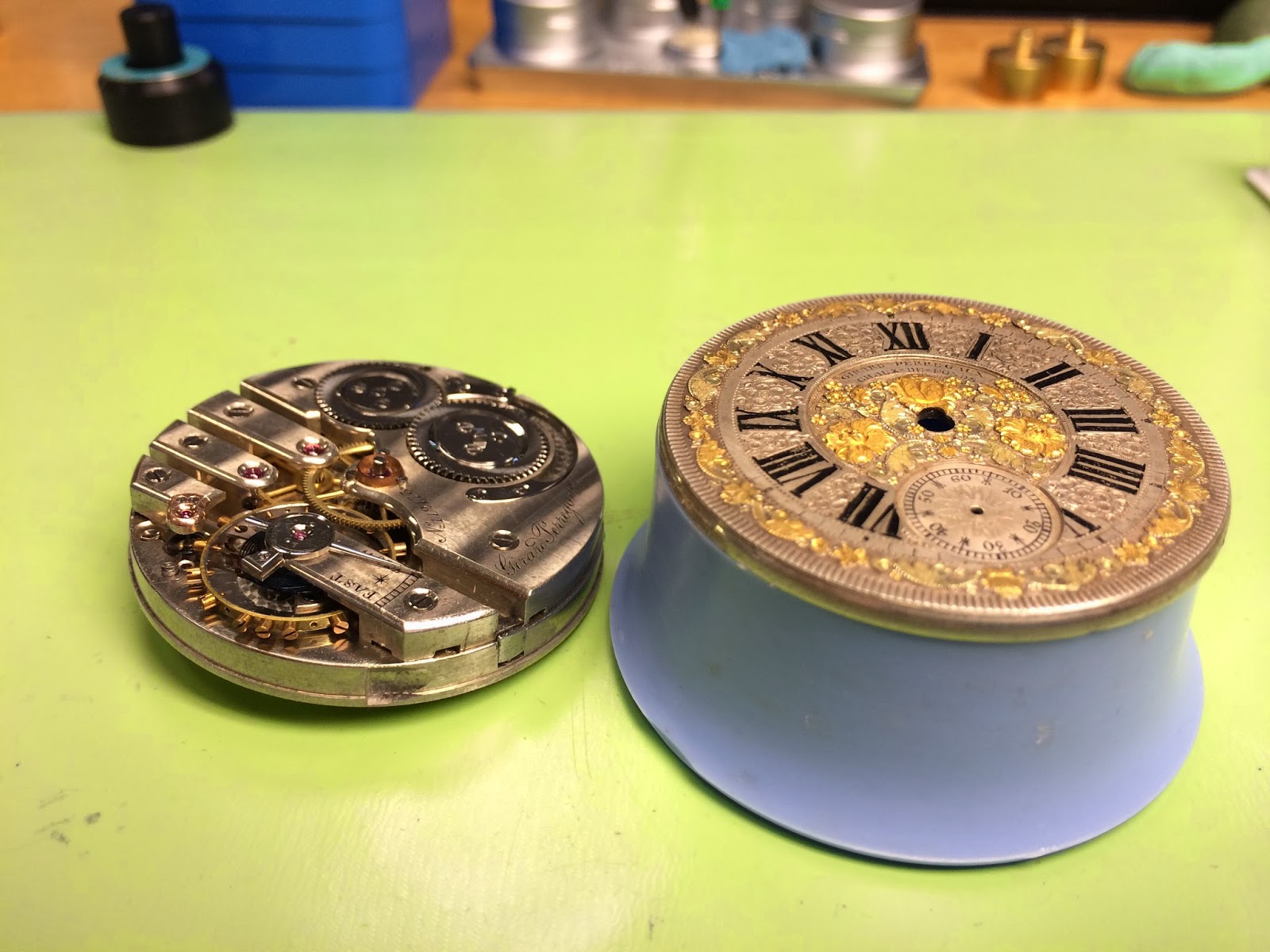 And that DIAL! real high grade engine turning with both silver and gold. The dial alone would have taken a skilled engine turner at least a week!
Posted by Unknown at 2:19 PM No comments: